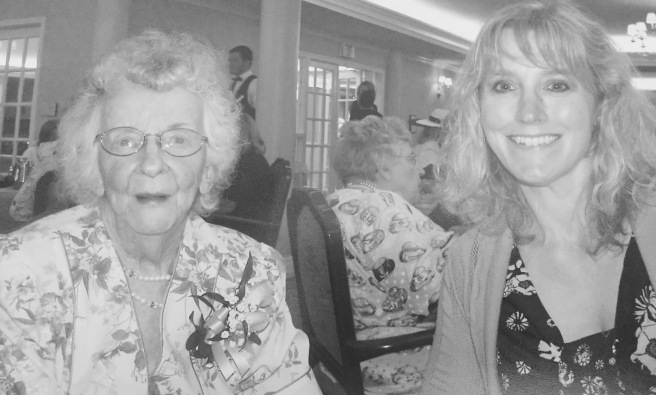 This is my grandma. But it isn’t.

But for me, she died years ago.

My Grandma was a woman who was known to be as proper as one should be in the small town of Perryopolis, Pennsylvania.

When she set the table for lunch, bread was pulled from the bag and placed into a basket lined with a napkin. Deli meat was fanned out onto a platter. Applesauce was poured from the jar into a dish. Even mayonnaise was spooned out and into an amber glass.

In case someone came to the door during lunch, she didn’t want anyone to see jars on the table. Apparently jars were the epitome of low class.

If this is the standard, then I am very low class.

But that wasn’t her only idiosyncrasy.

She would wax the hot water tank so it stayed looking shiny and new.

She would iron my dad and grandpa’s undershirts in case they were called to a fire in the middle of the night (they were volunteer firemen).

But behind closed doors, she was her completely goofy self.

She had fart contests with me. She always won.

When we watched a ballet on TV, she admired how much “culture” Baryshnikov had. Between the legs of his leotard.

If she heard something vulgar, she would claim, “I’m from Missouri,” like she was too innocent to get it. She wasn’t.

If we heard a motorcycle or loud car, she’d murmur, “Hot damn,” and raise her eyebrows suggestively.

She was absolutely a product of her generation. She watched her husband go to World War II and kept a world map to mark his different locations while she worked at Westinghouse. She raised one son and buried her second before he was six months old. She played bridge, was a Worthy Matron in the Eastern Star, and had weekly beauty appointments.
But she was also a contradiction of her generation.

She worked part time in a hardware store and knew how to fix a toilet. She took Calculus in high school and always said that she would have been a train engineer…  if she had been a boy. She broke up with my grandpa once in high school because he got too jealous of her male lead in the school play.

Every single memory of my grandma is filled with love, joy, and sometimes exasperation. Like the time I visited her in my mid-20s. Her words of solace in my singledom? “Why, in my day, you’d be a spinster!” Thanks, Grandma.

However, memories can be fickle, and they can evaporate.

When she was finally diagnosed with dementia and Alzheimer’s, no one was surprised. She had been forgetting things for a long time. Like the time I went to pick her up at her apartment and the stove burner was red hot with an empty pot on it. She had forgotten how to use the microwave, so she decided to boil water to make coffee. She then forgot about the water and it boiled away.

She forgot dates, numbers, plans. She would call me in a panic because I never showed to take her out to a lunch that was planned for the following day. Timelines became confused and she would ask if I remembered when Faith taught us in high school. She once insisted that her mother had died in child birth with her. Even though she had a younger brother.

And then she forgot people.

At first, she just needed a gentle reminder. Visits changed from her exclaiming, “Andi!” to me asking, “Do you know who I am?”

More often than not, she would nod yes, but was unable to answer the follow up question, “Who am I?”

I slowly got used to being introduced as her niece, cousin or nurse. In the picture above, I was introduced as all three.
Eventually, she barely spoke. She was always happy to see me, but I was just someone giving her undivided attention. She became extremely affectionate and just wanted to touch my face, or kiss my cheek, or stroke my hand.

For the last year, she was a shell of her former self. Just a body going through the motions of living. Sleeping, being fed and dressed and showered and pushed. Her beloved Bible stayed shut, the people in the pictures were strangers, and the TV ran on a continuous loop.

She had not been living, but merely existing.

I am deeply mourning the physical end of her life. But I understand that my real Grandma died a long time ago. The woman who spooned mayonnaise into that amber glass so that potential visitors wouldn’t think she was low class would have been mortified to know she would live out her days with every bodily function facilitated by strangers. She would have been appalled to think she would forget her husband, her family and her church.

So while I am sad for her passing, I am relieved that she is at peace. I loved her in all of her stages of life, and will continue to do so for all of the life I have left. But my grandma and the woman in the photo were two different people. Same face, but different personalities.

Goodbye again, sweet Grandma. I have missed you for years, and always will.